– With a total length of 347 kilometers, (216 miles) Sac Actun is the largest flooded cave in the world
– It is the result of many hours of exploration and hard work leading to the connection of Sac Actun System 263 kilometers (161 mi) and Dos Ojos 84 kilometres (52 miles).

On January 10th, 2018, the Underwater Exploration “Group Gran Aquifero Maya” (GAM), succeeded in connecting  two of the largest flooded cave systems making it the longest flooded cave in the world.

While Robbie has been actively looking for this connection during the last 14 years and adding new tunnels and galleries to this underwater maze, this stage of the project started in March 2017.

Until then, the 4 largest cave systems ranked as follow: 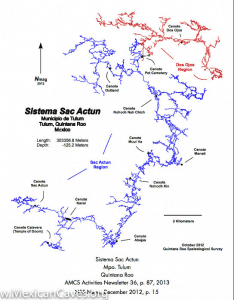 Sac Actun and Dos Ojos are now connected as a result of this intensive exploration.

According to the rules of caving, when two cave systems are connected, the largest cave system gives its name to the new one. Therefore the name of the Dos Ojos system disappears :'( .

Hence, the Sac Actun System is now the largest system in the world, with a length of 347 kilometers – 215 miles of flooded cave.

This finding is also very valuable, because this system supports a great biodiversity that live thanks to this huge reserve of fresh water.

But of course, underwater cave exploration is far from finished! New objectives pop up and the goal is now to connect Sac Actun with other nearby underwater cave systems in the municipality of Tulum.

Local explorers seek to better understand the underground of the Yucatan peninsula. And, they also investigate its biodiversity and the relationship of the humans with these ancestral waters. Of course, very concerned by their environment and pasionate, the aim is to manage an adequate use of the natural resources from this aquifer.

There will be more very ambitious stages to this project. Among those, stands the analysis of the water quality of Sac Actun System. As well, there will be studies of the biodiversity and its conservation; in addition to following up the mapping and investigating the submerged archaeological sites.

According to the Quintana Roo Speleological Survey (QRSS), the north of Quintana Roo alone hosts 358 submerged cave systems. It represents around 1400 km – 870 miles of flooded caves.

The word of the restless explorer, Robert Schmittner

“This is an effort of more than 20 years, to travel hundreds of kilometers of caves submerged in Quintana Roo mainly, of which I had dedicated 14 years to explore this monstrous Sac Actun System; now everyone’s job is to conserve it”

The word of the National Institute of Anthropology and History (INAH) and Director of the GAM Project, Guillermo de Anda

“This immense cave represents the most important submerged archaeological site in the world, as it has more than a hundred archaeological contexts. Along this system, we had documented evidence of the first settlers of America, as well as extinct fauna and, of course, the Mayan culture.”

Tulum: the mecca of cave diving.

Underwater explorers from all over the world have devoted their lives to their passion for exploration. Among them Bil Phillips, pioneer of the exploration of the Mayan aquifer. He founded together with James Coke, the Quintana Roo Speleological Survey (QRSS). The QRSS database gathers detailed maps of these complex systems. Today it is a valuable tool to understand and protect the aquifer.

Bil Phillips explored this wonderful underwater world until the last days of his life. For more than 40 years he devoted himself to understand the aquifer through the investigation of these ancestral waters.

Bil Phillips was an underwater cartographer and explorer, he passed away in November 2017.

Who can dive Sac Actun?

All certified cave divers can discover the Sac Actun System. Obviously with 347 km it leaves the possibility of many hours of diving. The system also has many entries. Do not hesitate to contact us to guide you in the most beautiful tunnels of the network. 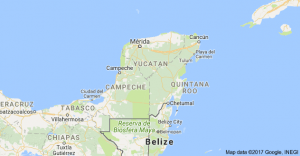